Definition: Percent of youths (grades 6, 8, 10, 12) who have smoked cigarettes at least once in their lifetime.

Importance
Cigarette smoking during childhood and adolescence produces significant health problems among young people, including an increase in the number and severity of respiratory illnesses, decreased physical fitness and potential effects on the rate of lung growth and maximum lung function.

Health Disparities
Among youths in Douglas County in 2014: As grade level increased, the percent of youths who had smoked at least once increased.

Healthy People 2020 Goal
Reduce the initiation of the use of cigarettes among children and adolescents that are between 12 and 17 years of age to 4.2%.

Additional Information
Prevention is critical. Successful multi-component programs prevent youths from starting to use tobacco in the first place and more than pay for themselves in lives and health care dollars saved. Strategies that comprise successful comprehensive tobacco control programs include: 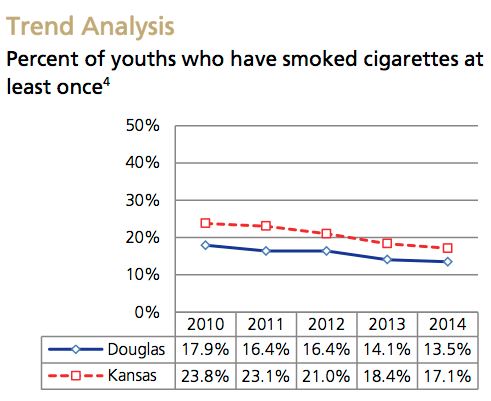