Definition: Percent who have been diagnosed with cancer (excluding skin cancer).

Importance
Cancer is the general name for a group of more than 100 diseases. Although there are many kinds of cancer, all cancers start because abnormal cells grow out of control. Untreated cancers can cause serious illness and death.

Health Disparities
Among adults in Kansas in 2013:
Healthy People 2020 Goal
Not available.

Additional Information
Half of all men and one-third of all women in the U.S. will develop cancer during their lifetimes. Today, millions of people are living with cancer or have had cancer. The risk of developing many types of cancer can be reduced by changes in a person’s lifestyle, for example, by staying away from tobacco, limiting time in the sun, being physically active, and healthy eating.

There are also screening tests that can be done for some types of cancers so they can be found as early as possible - while they are small and before they have spread. In general, the earlier a cancer is found and treated, the better the chances are for living for many years. 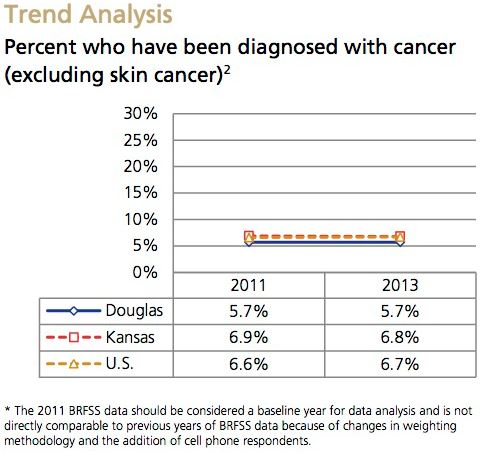