Classes are ongoing, free and open to any dad or father figure in Douglas County. Child care and snacks are provided.

The program follows the "Quenching the Father Thirst" curriculum provided by the National Center for Fathering.

To enroll or for more information

Children without a father figure in their lives experience a range of social problems, including increased rates of poverty, teen pregnancy, crime, substance abuse, poor health and emotional problems. Research also indicates that fatherless children are more likely to struggle academically and are less likely to attain academic and professional qualifications in adulthood.

The National Center for Fathering classifies father-absent homes as a national emergency with an estimated 17 million children, or 23 percent of the U.S. population under age 18, living in a home without the physical presence of a father. In 2014, 1 in 5 children in Douglas County were living without a father in a family, according to the U.S. Census Bureau.

Douglas County resident Joe Ricley describes "Healthy Dads" program as "a blessing." He said he found support and community resources through the program. To read his story, click here. 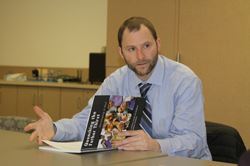